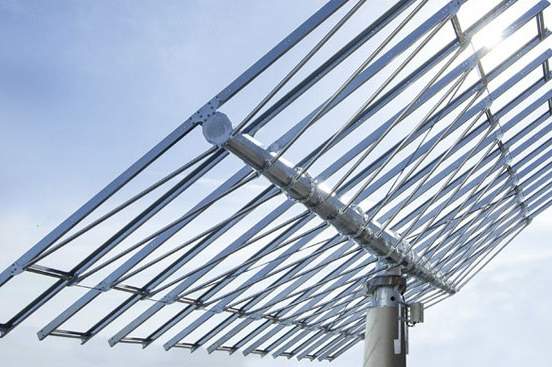 Mechatron Solar Inc. will inaugurate a six-unit dual axis commercial solar tracker car canopy at the Kahala Tower in Burlingame, Calif., on November 13. The patented, revolutionary M18KD-20 tracker is the largest dual axis solar tracker available in the United States, yielding between 45% to 60% more energy than a fixed-tilt solar array using the same number of solar panels, at a cost of about 50% less than fixed-tilt.

The 200 kW DC Kahala array is hosted in the parking lot of the multi-story commercial building located near the San Francisco Airport, where it was installed by Elios Solar Inc. Mehrdad Elie, the CEO of Elie Corp., based in San Francisco, chose the Mechatron technology for its unique yield and payback, as well as for its tight footprint compared to other commercial solar solutions. The array will provide over 90% of the building energy use as well as energy for the building’s first EV charging station.

The Mechatron array will provide a Levelized Cost of Energy at seven cents per kWh, compared with an estimated LCOE of 24 cents for a fixed-tilt design. Because of its superior cost-benefit, the Mechatron tracker enables a Return on Investment of less than four years. The total cost of this project utilizing Mechatron trackers was $368,000 compared to an equivalent carport canopy system at $733,300, an overwhelming 49% capital investment reduction.

The energy savings of the Mechatron system, along with the Federal ITC 30% tax credit for solar installations, and with a 5-year MACRS accelerated asset depreciation, results in a rapid 3.5 years ROI for the Kahala Carport investment versus an average 7-9 year ROI for fixed-tilt canopies.

The M18KD-20 tracker tilt capacity at the site is limited to 20 degrees on the zenith axis in order to limit its platform distance from the parking pavement by at least 9.5 feet as required by Burlingame building codes. Each tracker supports 90 Peimar 72-cell 370 W panels generating total power of 33.3 kW each; each tracker is connected to 3-phase string inverters from Solectria.

Mechatron has installed over 4,000 trackers at over 900 locations in the United States and Europe, with over 90 MW of installed capacity. The company has worked with over 500 EPCs world-wide, and it has an over-lapping global network of suppliers in China, Mexico, Greece, Italy and Spain, within the company’s expanding strategic network.