This week, the solar industry finds out its fate. On Sept. 22 (at the latest), the ITC will announce whether it finds in favor of the Section 201 petitioners or not. As a final update on where things stand before that day, a panel of industry executives took the stage at Solar Power International to relay their insights. Here is what stood out to us. 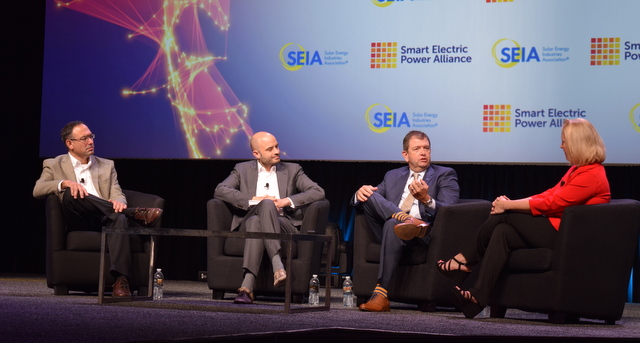 • OK, so this point wasn’t hyped up during the discussion much, but I’m hyping it up here: For some reason, there were only four commissioners hearing the case, when, apparently, there are usually more. This matters because a tie results in a petitioners’ win. So, the solar industry needs a 3-1 vote.

• The 201 hearing itself set all sorts of records for duration (11 hours), witnesses called (20) and the number of attendees on hand to show support. The vibe in the crowd was definitely against the petition, and while the hearing itself “could go either way,” panelists were encouraged by the specificity and direction of the followup questions from the commissioners, which seemed to address the points the solar industry was making.

•  The impact of this trade case has been cited a bunch since the petition was filed – 88,000 jobs will be lost immediately; 47 GW will go uninstalled (more than is installed currently) – but Bill Vietas, president of RBI Solar, noted he’s already felt the impact — business started to slow down, developers started changing module orders in response to prices creeping up, and capital has been staying on the sidelines as everyone waits out the uncertainty. If injury is found, Vietas expects at least half of his business to go away.

• The panelists all shared stories of how the petitioners in this case were unreliable and tough to deal with, which was all noted during the case, and which the petitioners “didn’t really dispute.” George Hershman, SVP, general manager, Swinerton Renewable Energy, didn’t mince words, citing shipment delays, product defects and warranty disputes, and then, on top of that: “We did 1.5 GW installations last year. So, we did 75 MW in Oregon, and we said it would be a great opportunity to use SolarWorld modules and use local Oregon content. And every one of them came from Thailand. … Even when we tried to use them in utility-scale project, they couldn’t supply to the Oregon industry.”

• Vietas thinks the downstream impact is still being misunderstood. “A lot of these component manufacturers don’t even know they’re in the solar industry.” Case in point, RBI uses 100 percent U.S. steel in its mounting products, and, perhaps not fully grasping the stakes of the case, U.S. steel have come out in favor of the petitioners, lured by that siren song of trade tariff protection (the steel industry was the last sector to push forward a 201 trade case).

• Ed Fenster, executive chairman, Sunrun, explained the differences between this petition and the trade case from 2013: 1) In prior cases, the petitioners had to show that imports were a cause of harm; here they must show imports are the principal cause of harm. 2) In the first case, the data showed a lot of underselling by imports; here it was more even handed. 3) In the China and Taiwan cases, the commission was forbidden from considering the effect on downstream and upstream industries; here they have to take that into account. 4) Previous instances when the commission decided to put a tariff under section 201, predominantly, they look to see if the domestic industry can come close to meeting domestic demand. If not, they put a quota system in place where X GW of panels can come in with the rest being tagged from there, which isn’t the case here.

“This is not about malfeasance, just fairly traded goods and a couple companies saying they couldn’t make it,” Fenster said.

• Another HUGE fact, to our ears, via Hershman, that undercuts the entire premise of this petition right out of the gate: “SQN financed an equipment lease for Suniva for $55 million, and in an effort to recapture that investment from a bankrupt company, they became debtor in possession and dragged Suniva into this case. SQN issued a letter to the CCME [Chinese manufacturing industry] saying if you can find somebody to buy our equipment or pay us for our debt, we will drop this case.”

“So, this was about a failed debt that has blossomed into this case … it’s hard to look past that this is an attempt to extort money from manufacturers that has now put all of our jobs at risk.”

• Lastly, I mean, look at this chart, and then make a coherent case for how jobs will increase when panel pries increase. Go ahead, we’ll wait. 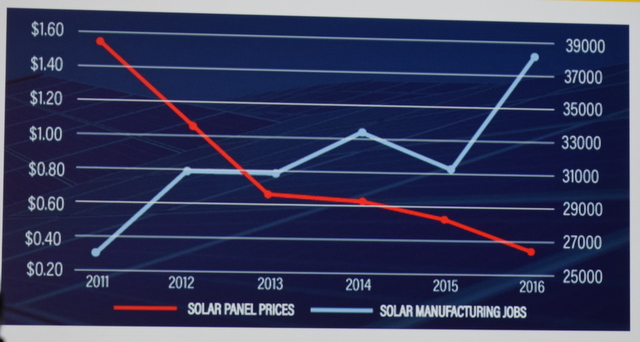