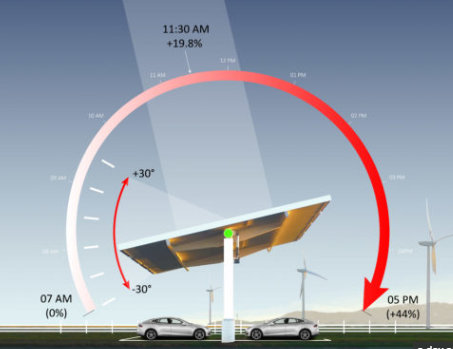 Scarlet Solar released the TiltPort S range — a carport with a tilting roof that the company claims is capable of generating up to 44 percent more energy than an equivalent fixed carport.

A 35’x44′ TiltPort S, rated up to 35 KWp using 96 solar panels, offers shade for 10 cars and can be installed in just three hours. Any number of units can be installed adjacent to each other. The system is rated for winds of up to 130 mph and for every climate in the US.

The Scarlet TiltPort is factory-built, thus able to offer higher quality, greater reliability and very rapid installation: each unit takes in total around three hours to install. By comparison, a conventional carport is assembled on-site, a labor-intensive process that can take several weeks.

“This is a carport in a wholly different class from the rest,” said Alain Poivet, CEO of SCARLET Solar. “People find it hard to believe that a TiltPort can generate 44% more output, but it’s a measured result: we have tested TiltPort S extensively against a similarly-oriented carport fixed at 10 degrees. It’s taken us three years and an outstanding team of Silicon Valley structural, mechanical and software engineers to make these units optimally efficient, easy to install and operate, and very, very reliable.”

Given its increased output efficiency and reduced installation costs, TiltPort could pay for itself in a fraction of the time of a conventional carport. Additionally, the TiltPort system is modular and capacity is almost infinitely expandable: any number of TiltPort S units can be installed adjacent to each other.