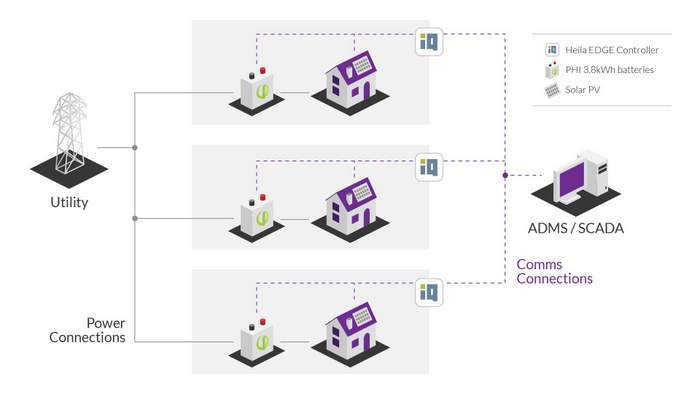 This project will serve as a model for other stakeholders who are interested in the benefits of decentralized energy generation and storage working as a virtual power plant.

“Behind-the-meter energy storage is a cost-effective way to help utilities and customers alike manage their electricity usage with the security of knowing they have access to stored energy that can be seamlessly integrated into the grid or islanded during power outages” said SimpliPhi Power CEO Catherine Von Burg.

Under a single platform, SWEPCO will be able to leverage the storage+solar systems to correct power factor, perform peak shaving, and manage overall energy supply, all while improving customer resiliency.

Building resiliency for utility customers using renewable power generation plus storage will be key as the Southeast United States continues to see an increase in extreme weather events due to the impacts of climate change.

“The Heila Platform is able to sense changes across all connected components and make the system holistically and automatically respond to the changing conditions of the electrical grid,” noted Heila’s Senior Engineer and Co-Founder, Jorge Elizondo.

The SimpliPhi+Heila solution, consists of PHI 3.8 kWh batteries, inverter(s), and a Heila EDGE controller which acts as a Battery Management System (BMS) and an Energy Management System (EMS). Any and all distributed energy resources (DERs) controlled by a Heila EDGE in a system are then aggregated and optimized to form a distributed intelligent network that can be used by any central controller, ADMS or SCADA to control the fleet as a single entity using common protocols.

The PHI batteries measure and report voltage, current and temperatures, and perform useful calculations to determine real-time battery state of charge (SoC), state of health (SoH) and fault detection. Heila is programmed to operate the PHI battery units in either grid-connected or off-grid mode, and manage transitions between modes, enabling full control of the flow of real and reactive power to and from the grid, load curtailment, and more.

The utility or grid operator can set performance objectives at the aggregate level, rather than on a DER-by-DER basis and collect real-time and historical data from all systems to streamline grid operations.