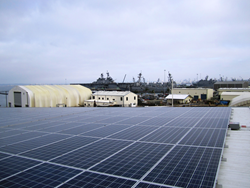 Baker Electric Solar, a full-service solar provider, has designed and installed a 482-kW rooftop solar system for Marine Group Boat Works (MGBW), a West Coast family-owned boat building and repair company. The San Diego-based shipyard and longtime Port of San Diego tenant will see an 81 percent reduction in its annual electricity consumed based on past and projected consumption.

Projections also indicate that MGBW will save an estimated $154,196 in energy costs in the first year. The system is comprised of 1,558 Hyundai 310 watt (W) solar modules with 14 SMA inverters. MGBW has three facilities totaling more than 1,300,000 square feet. The rooftop solar installation is located at MGBW’s 35,000-square-foot facility at 1313 Bay Marine Drive in National City, California.

“Our initial decision to go solar was driven primarily by our desire to be a zero-emission, low impact boatbuilder,” said MGBW President Todd Roberts. “There’s no question that solar is an economic benefit, but there are many other advantages – everything from self-reliance and sustainability to doing the right thing. We chose to do the right thing, as we have in our other lines of businesses, to continue being leaders in our community.”

MGBW contracted with Baker following a nationwide search for a solar provider.

“We found Baker had the experience and did the best job of explaining the options,” said Roberts. “They worked closely with our structural engineering and steel contractor and added roof reinforcements designed to meet seismic requirements when the concern came up. Baker stayed on schedule, did a great job of communicating and even arranged the solar commissioning after-hours and on a weekend to help us avoid interruptions to our business operations.”

The PSEG Rawhide Flats Solar Center was built on a 190-acre site leased from the power authority at the Rawhide Energy Station and will generate enough electricity to meet the needs of 8,000 Colorado homes. PSEG Solar Source has a 25-year power purchase agreement with Platte River, a wholesale generation and transmission provider.

juwi developed the project and served as its engineering, procurement and construction contractor. The facility will use approximately 117,000 polycrystalline panels.

“We are thrilled to be a part of energizing one of the largest solar projects in our home state here in Colorado,” said Michael Martin, president of juwi. “We look forward to the successful operation of the Rawhide Flats project and to continued partnerships with clean energy leaders like Platte River and PSEG Solar Source.”

The Rawhide Flats facility has been in startup mode for the past week and should shortly begin commercial operations. Once it begins commercial operations, PSEG Solar Source will have 15 facilities in service in 11 states with a total capacity of 215 MWs. It has two facilities, totaling 100 MWs, in construction which it expects to have in service within the next two months.

This latest addition to PSEG Solar Source’s portfolio represents an investment of more than $54 million.

Construction is beginning on a 2-megawatt solar array that will supply electricity to Ohio Northern University.
Under a 25-year power purchase agreement, ONU will purchase electricity directly from the array without needing to invest capital in the array’s construction and maintenance.

Using 18,000 thin-film panels from First Solar, the array will include a single-axis tracker. The solar field will generate about 10 percent of ONU’s annual electricity needs, reducing ONU’s carbon footprint by over 2,200 tons, equal to 210 average households.

GEM Energy of Walbridge, Ohio, is developer of the solar project and will design, construct, operate and maintain the ground-mounted solar array, located just southwest of campus. Construction will be complete at the end of 2016.

ONU will include the solar array in its renewable energy curriculum. The new program will be led by GEM Energy and will include pilot student teams.

SoCore Energy commenced construction of a 1.9-megawatt ground-mounted solar project in Leakey, Texas, for Bandera Electric Cooperative (BEC). SoCore worked to develop this project for BEC, which will provide the opportunity for its members to subscribe to community solar power for their homes and businesses.

This project supports BEC’s mission “to enhance the quality of life of its members by providing highly reliable electric services at a competitive price.” The Leakey facility will generate an estimated 3,587 megawatt hours (Mwh) of clean energy within its first year of operation, the equivalent of offsetting the annual CO2 emissions resulting from electricity usage of approximately 372 homes. “We are excited to bring this innovative opportunity for our members to participate in community solar,” said BEC Chief Executive Officer William Hetherington. “We are looking forward to working with SoCore to deliver reliable, cost effective and renewable energy that supports our communities for the long term,” he continued.

Following construction, an affiliate of SoCore will own and operate the facility, which will provide power to BEC under a Power Purchase Agreement. Bandera Electric Cooperative distributes electricity to nearly 24,000 members and more than 34,400 active meters across seven counties in Central Texas.