The Defense Department has been installing solar at military bases at a fairly steady pace the last few years. The most recent projects coming online soon include a large Gulf Coast Solar Center portfolio (across three sites) and a new solar + storage system at a post in Alabama.

Here’s the scoop on those. 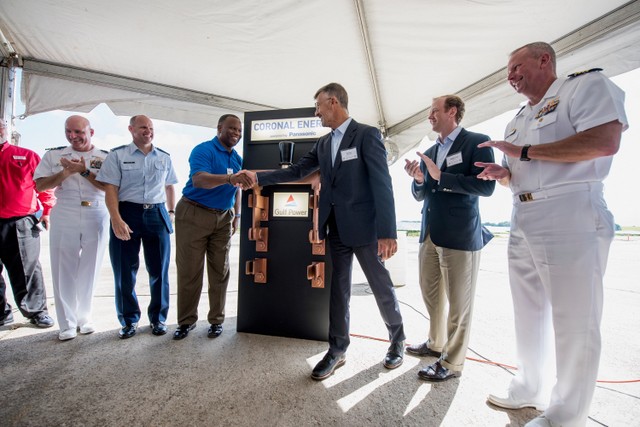 “Considering the scale of the Gulf Coast Solar Center portfolio, collaboration between our team and the like-minded teams at the U.S. Air Force, U.S. Navy, and Gulf Power has been an essential element of our success in developing these projects,” said Jonathan Jaffrey, chairman and CEO of Coronal Energy™. “The result is a landmark energy project that represents what is possible when our nation’s military and its leading energy companies like Gulf Power commit to renewables. We are honored to take our place alongside these partners for this historic project.”

“Each installation and mission throughout the Southeast is unique and it is imperative for us [the Navy] to have the energy security and resilience needed to support the greater Navy mission. There are eight renewable generation projects that DON is supporting in the southeast and today you are seeing the completion of two solar facilities in Northwest Florida totaling 122.5 megawatt direct current,” said NAS Pensacola Commanding Officer Capt. Christopher Martin. “We are pleased to know these facilities will help provide clean energy to thousands of homes across Northwest Florida.”

SunPower Corp. has broken ground on a 10-MW solar  system at the Redstone Arsenal U.S. Army post in Alabama and will combine with a newly added 1-MW energy storage system to strengthen energy security and resilience at Redstone Arsenal.

Developed by the U.S. Army Office of Energy Initiatives, Redstone Arsenal’s Directorate of Public Works, and the U.S. Army Corps of Engineers Huntsville Center’s Energy Division, the project was financed by a power purchase agreement (PPA), allowing the Army to buy 100 percent of the power generated without having to pay for the power plant’s construction, maintenance and operation. The Army continues to collaborate with private-sector partners and utilities to build clean, alternative energy projects including onsite power generation, electricity storage, and energy control.

“Solar is cost-competitive with traditional energy sources today, and is helping the U.S. military reduce operational costs,” said Nam Nguyen, SunPower executive vice president. “We commend Redstone Arsenal for managing its significant energy demand with abundant, renewable solar power. The high performance solar and storage technology we are installing for the agency will substantially increase the value of energy produced by the solar plant over the long term.”