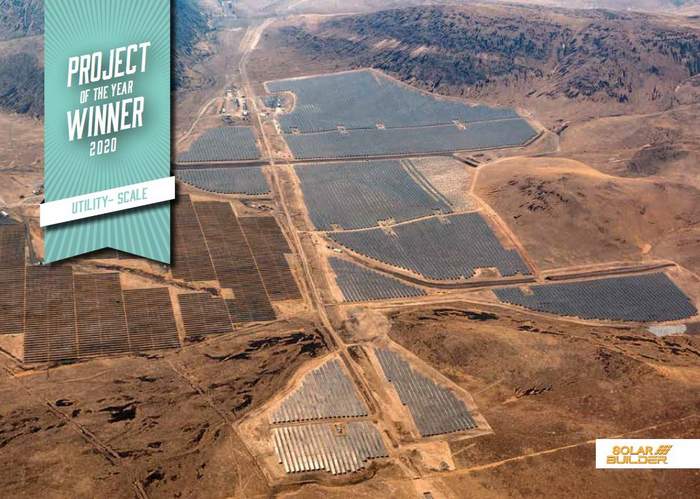 The project site for our 2020 Utility-Scale Project of the Year, as voted by the Solar Builder readers, is located in the Reno Technology Park, approximately 15 miles northeast of the city of Reno. The Park is a 2,200-acre master planned industrial park shared between Apple, which owns approximately 1,600 acres, and Turquoise Solar, which owns approximately 600 acres. Apple’s major Nevada data center campus is located in the Park with over 300 MW of load. Upon completion, Turquoise will provide power via Nevada Energy, allocated for Apple’s data center through their Green Energy Rider Agreement with NV Energy.

It is a massive, standout project — but one planned on nearly impossible land for a solar array. Turquoise sits on approximately 180 acres of igneous rock and a ledge at a mountainous base.

After numerous failed trials from other solar installation companies attempting to drive piles into the site’s rocky terrain, Greenbacker suggested to McCarthy to call TerraSmart, known for its proven ability to forge into arduous soils with its proprietary ground screw foundation. TerraSmart was hired to not only install the solar-racking foundation but also utilize the company’s array of turnkey solar services that would help expedite the project’s construction schedule. Along with getting the job done, this switch saved time and additional costs by eliminating unnecessary clearing and civil work.

“The selection of TerraSmart as the racking vendor was a practical solution for the project, reducing cost and schedule risk,” Beason says. “TerraSmart performed as a partner through the project duration, proving their value and expertise not only in the installation of their product but also prior to contract award in the pre-construction and late stage development of the project.”