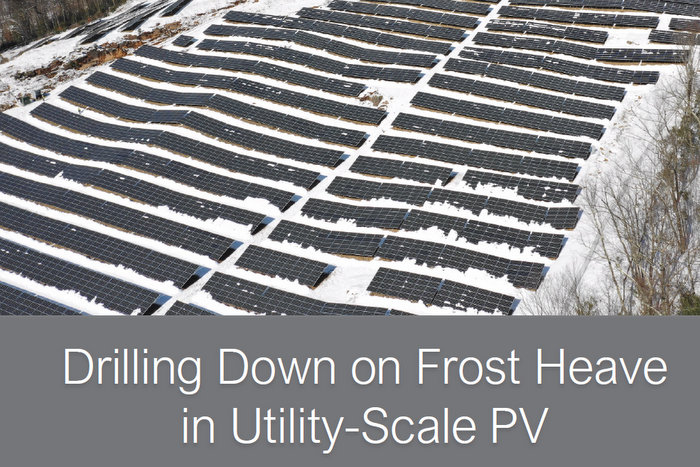 The following is an excerpt from a whitepaper produced by TerraSmart. You can request to download the full version here.

As the demand for renewable energy grows across North America, an increasing number of utility-scale photovoltaic (PV) projects are being deployed in regions that experience severe winter conditions, including deep ground freezes. With that freezing comes frost heave and subsequent frost jacking of foundations, which can wreak havoc on installations not properly designed to compensate for those stresses.

To contend with the potentially catastrophic consequences of this geotechnical phenomenon, solar EPCs, developers, and asset owners need to understand the forces at play so that they can protect themselves from risks of overextended schedules, budget overruns, equipment damage, and system downtime.

Frost heave is the upward ground movement that occurs as soil freezes. Originally thought to occur as soil volume increased when water became ice, frost heave now is understood to occur because of ice lenses, which form parallel to the surface from water diffused within the soil. As frost penetrates the ground, water is drawn up into the freezing zone, forming layers that force soil particles apart and cause the soil surface to heave, as depicted in Figure 1.

Three factors need to be present for frost heave to occur:

Depending on the degree of these three factors, soil can heave at rates ranging from 1/64th of an inch to three-quarters of an inch each day. For PV plants with driven piles, the foundation also can be subject to adfreeze, in which the frozen soil adheres to the steel surface of the piles. This adfreeze, combined with frost heaving of the soil adjacent to the piles, results in an uplift force known as frost jacking, which lifts the foundation.

Figure 1 shows how permanent vertical deformation of the foundation can occur if it has not been designed to resist the frost jacking force through sufficient embedment below the frost zone. Later, when the ice melts and water dissipates back into the soil, the foundation and structure drop into the resulting void.

Figure 1: Effect of Frost on Soil

Most soils can heave if there is a sufficient freezing rate and water supply. But the rate at which soil can heave is dictated by its grain size structure and subsequent permeability and capillary flow. Generally speaking, soil can be classified into three groups: sand, silt, and clay. Sand and gravel, with their large grain sizes, are most permeable to water, which can help to move moisture away from the surface before it freezes. Clay soils have the smallest grain size, which means low permeability that impedes the rate at which water can feed a growing ice lens.

With grains that are smaller than sand but larger than clay, silt is the most susceptible to frost heave because its fine grain structure holds water within the frost depth zone. Silt also promotes capillaries that allow more moisture to feed into ice lenses, which can grow to be up to four inches thick.

Geographically, frost heave can occur anywhere that experiences freezing temperatures, but it becomes a more significant issue in northern climates where temperatures remain below freezing for prolonged periods of time. A shallow, brief freeze does not allow enough time for ice lenses to form and deepen. In general, the deeper the average frost depth, the greater the likelihood of frost heave and the more significant damage can be.
As previously discussed, frost heave requires freezing temperatures, fine-grained soils, and the presence of groundwater. Fine-grained soils are common in the Northeast and Midwest, where glacial till is widespread, as shown in Figure 2.

Figure 2: Map of Glacial Till Occurrence in the U.S.

Northern regions in the United States typically have soils based on glacial till, the fine-grained silt sediment deposited by receding glaciers. Figure 2 shows where glacial till is most commonly found. The Northeast also experiences the country’s longest, deepest freeze conditions. Nonetheless, the region’s PV market is one of the fastest growing in the country, making frost heave considerations all the more critical there.

The U.S. Army Corp of Engineers conducted extensive research to classify the frost susceptibility of soils based on percentage of fine grain particles, soil type, and results from laboratory freezing tests. Results of this classification are shown in Figure 3 and Table 1, where it can be seen that soils with higher percentages of fine grain material are classified as the most frost susceptible and which show the highest rates of frost heave.

Figure 3: Susceptibility of Soils Based on Soil Type. U.S. Army Corps of Engineers 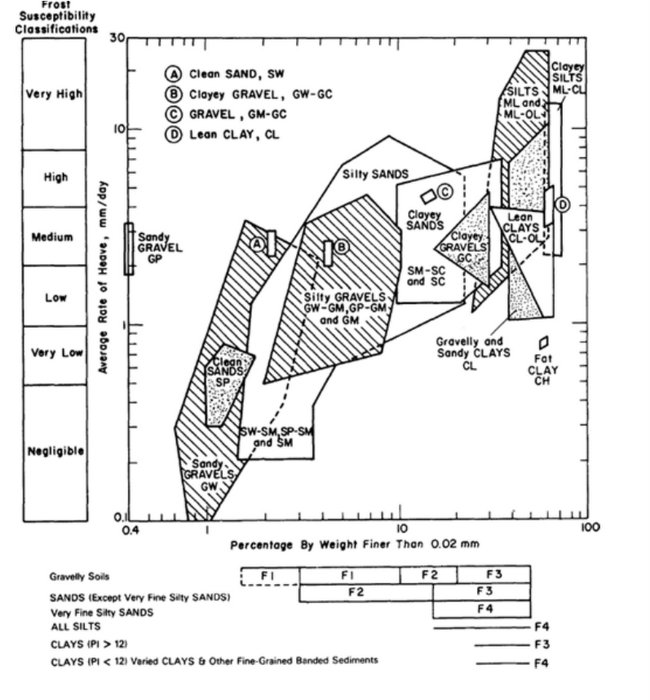 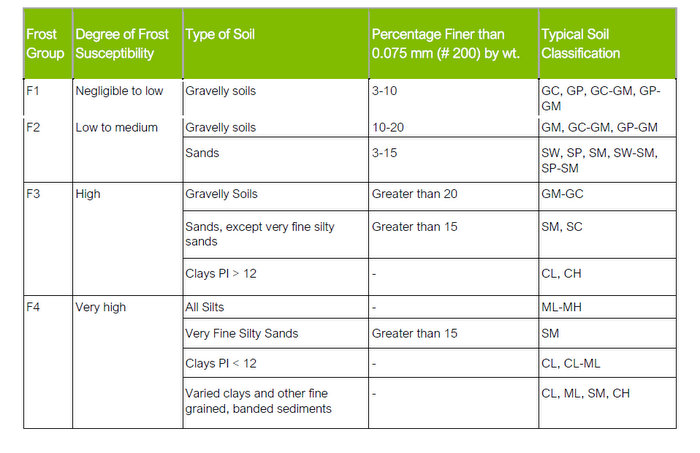 The degree to which frost heave will impact a site is directly related to the depth the ground fully freezes.
This is typically referred to as depth of frost penetration or, more simply, frost depth. When designing a foundation, estimating frost depth becomes the critical design parameter to determine frost heave’s potential effects. Figure 4 shows the frost heave forces acting over the frost depth on a driven pile. 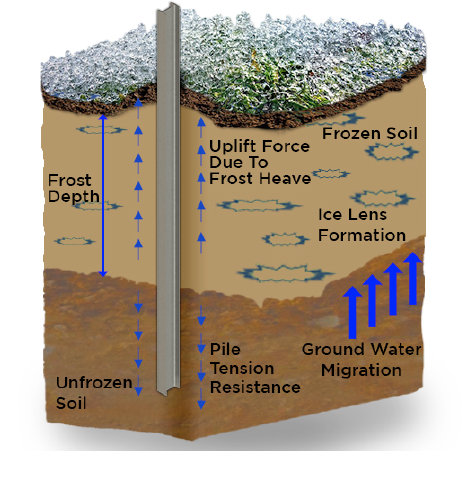 AFI values can be collected over multiple years and statistically analyzed as a generalized extreme value probability distribution, which is useful for assessing any return period. AFI values can be used to estimate a frost penetration depth. Northern regions of the United States are more prone to longer periods of below-freezing temperatures, which result in relatively deeper frost penetration. 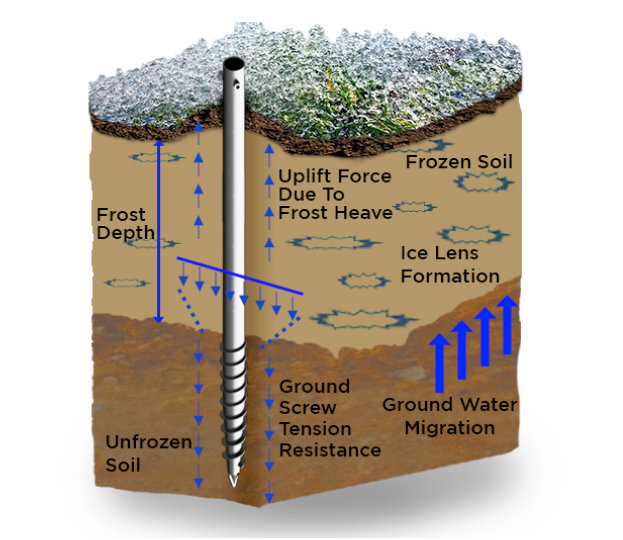 After assessing a site’s frost penetration depth, TerraSmart specifies a length sufficient to embed the ground screw’s threaded portion below the frost depth line. As show above in Figure 6, the screw’s threads are responsible for most of its tensile capacity; keeping the threads below the region of active frost heave ensures the design’s tensile capacity will exceed the project’s estimated frost heave forces.

This was an excerpt from a whitepaper produced by TerraSmart. You can request to download the full version here.