Traditionally, DC-coupled systems were used mainly in small domestic and off-grid applications. Systems using a charger controller to control the power into the chemical storage, or battery bank, were also not typically used commercially. The DC input voltage into the charger controller was close to the nominal battery voltage in the PWM types, and in the case of the MPPT types, the voltages were well above the nominal battery voltage, typically 80-150VDC in the most common type, and in the region of 600VDC in the more commercial units. In all cases of DC-coupling, the PV power was delivered directly to the battery bank. 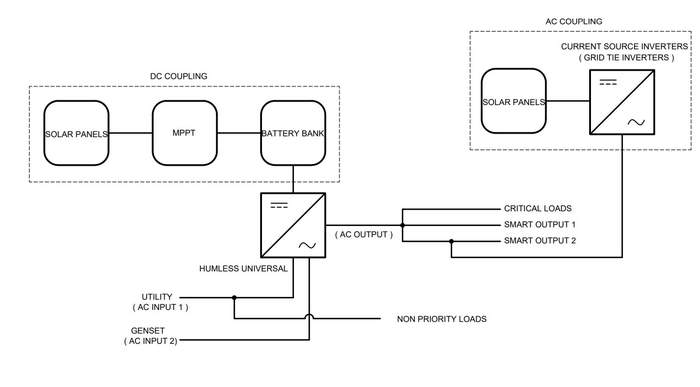 Commercially, and for utility-scale projects, the PV power was installed at much higher DC voltages (ranging from 300 VDC, and up 1500 VDC). These devices were essentially a source of AC current that went under the heading of grid-tied inverters. They operated without battery banks and delivered the PV power into AC current, injected into an existing AC source. This AC-source was in most cases the gird. The high DC voltages were applied to string and central inverters. Micro inverters are also in this group – where individual PV panel voltages or pairs of panels can be put into the microinverter and converters directly into AC current. The supply from the roof is then AC, and not DC.

The simple common features of the all the inverters in the above group of current sources devices are:

These are the more common types that most people are familiar with. They include: the uninterruptable power supplies (UPS), any battery backup system, and all solar inverters that have a battery of some type as the source of power when the grid is unavailable. A common feature is that these inverters can form an AC source and they are called “voltage source devices,” or “grid-forming devices.”

The most common, battery-based solar systems to date had a battery with a voltage source or grid forming inverter, to invert the DC in the battery to an AC source that is common in homes and businesses. The power that was used by the battery was replaced by solar panels connected to a DC solar charger (PWM or MPPT type) and then directly the battery bank. This type of system is called a DC-Coupled system.

If we now take away the solar charger controller and connect the solar panels to a current source inverter, then supply the lead, or voltage source, for the current, or grid-tie inverters to sync their AC wave form to, we have an AC-Coupled system. Please note, this term has nothing to do with being connected to a standard grid. Many people use this term to describe a system that has a grid connection to it. The correct term for this, is a Grid-Connected system.

We can now have a system that is off-grid, that could have 2 different sets of solar panels, with one set of solar panels being DC-Coupled and the other being AC-Coupled.

Advantages and disadvantages of AC-Coupling and DC Coupling

It’s important to note, where any battery-based system can be DC-coupled, NOT all devices, both current and voltage sources, can be AC-coupled together. Successful devices that are used in an AC-Coupled system is based on the voltage source device to be able to control the output of the current source device. For example, when a system is off-grid, and the battery is full and cannot accept more energy, and the PV system output of the current source device is greater than the load, then the PV solar power needs to reduce, or match the load, or turn off, so that the excess power will not overcharge the battery system and cause damage to both the system and the environment around it.

Warning – do not AC-couple inverters unless you are suitably qualified in this field and have the required knowledge. If this is done incorrectly, serious damage could occur to the system and may cause personal injury or death.

The major advantage of DC-coupling is that it is commonly used and is the simplest system to build. It contains a single inverter and a charger controller, which is a lower cost option for battery-based systems. The MMPT charger controller, if programmed correctly, offers precise battery charging.

The reality of this system is that the power runs in only one direction from the battery thru the voltage source inverters and to the loads. The disadvantage is that the inverter is always running with a load, which limits the system output to that single inverter.

When using AC-coupling you are no longer using the MPPT charger controller. Now there are two inverters with the PV solar panels on the current source device, and this is connected on the AC side of the voltage source inverter. The cost is now higher than the DC-coupled system, but it has some advantages. The first advantage is that micro inverters can be used, which then allows for rapid shutdown without the need for additional equipment. Another advantage is that as the power from the PV solar panels are injected on the output of the voltage source inverter, and therefore can be used directly on the loads. This translates into the voltage source device not needing to provide the power, and the batteries are generally cycled less in this type of system.

A further advantage is that in sunlight hours, the combined potential power of the inverters can be utilized to run larger loads on the voltage source devices. Also, the ability to start large induction loads are increased in daylight hours.

The major disadvantage, besides the increased costs over DC-coupling, is more complicated charging considerations. Current flowing backwards on the AC output must have control elements in place to insure safe and efficient battery charging and the management of the bi-directional flow of power.

Which method is better? The answer is not simple a one. Different cases will have different needs, and each system will have its pros and cons. Looking at mini and microgrid projects built internationally, combinations of both are used on the same project based on the load or demand mix.

A larger commercial facility may be best served by a 70% AC-coupled PV Array combined with a 30% DC-coupled array. This is to serve the large demands during the day, with only a small demand at night.
A domestic house may get better results in the long term with a 50/50 mix.

Combinations of DC and AC-coupled PV array on your projects may have many benefits, but make sure that both the equipment is able to operate in this mode and that the installers are fully trained in all aspects of this technology.

Lloyd Wilford is the CTO of Humless.  He is responsible for the installation of the largest Schneider XW platform, Hybrid Alternative Energy system as well as the world’s first integrated housing estate with a mini-grid system.