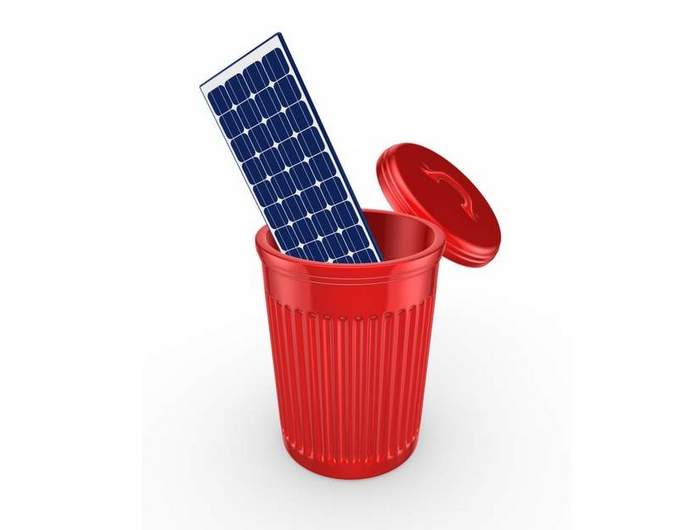 The solar PV panel recycling issue continues to loom large in the U.S., with more articles being written to show something needs to be done than actual things getting done. The volume of discarded modules could total 80 million metric tons by 2050. In addition to quantity, the nature of the waste also poses challenges. PV modules are made of valuable, precious, critical and sometimes toxic materials. This recent PV America article summed up the current situation quite nicely. As part of our 2021 Solar PV Modules Buyer’s Guide, we asked panel producers for their thoughts on the situation.

“There is currently no standard for how to recycle the valuable materials and mitigate the toxic ones,” noted Gautam Ghose, senior product marketing manager at Trina Solar. “There are valuable materials that can be recovered from modules (the older, the better). But the costs to collect modules are a big hurdle due to the high mass to value ratio, relatively low volume and geographic dispersion.”

That is the general refrain: As big of an issue as this is to get in front of, there just isn’t enough volume at the current moment to jumpstart a market. PV panel recycling just isn’t profitable.

“Until the PV waste stream gets large and consistent enough for a dedicated collection service, collection might need to be subsidized by voluntary manufacturer contributions or PV modules need to be included in an EU-like WEEE (end of life takeback) requirement,” Ghose says.

Sharma believes independent engineering firms, too, need to be involved in developing recycling procedures and policies. Several universities are conducting research to extract greater profitability out of the solar module components to make recycling more fiscally viable long-term. These initiatives require funding and commercial partners to deploy and scale-up. One notable third-party trying to make this happen is We Recycle Solar.

Other global manufacturers have worked with SEIA to implement a national recycling program here in the states as well as focusing on what they can control, the recyclability of the panel itself. JinkoSolar was one of two solar module suppliers to ever achieve a silver “Cradle-to-Cradle” certificate. Third party lab SGS verified that the product does not contain any hazardous materials and is safe, including when recycled.

“Recycling of PV modules is possible because more than 80% of the material is glass and aluminum, two easily recycled materials. Other materials are recovered and reused,” said Jeff Juger, Director of Business Development with JinkoSolar. “Nonetheless, it is evident that PV module recycling needs more R&D investment to find faster, more efficient ways to crush, separate, and recycle the components.”

“In addition to working with recycling partners, solar panel manufacturers can help reduce the carbon footprint associated with solar manufacturing and installation through mindful consideration of material health (ie reduction of harmful metals, such as lead), reutilization of materials, renewable energy use, water stewardship and social good,” says Melissa Watson, Marketing with REC America. “Second use application of solar panel materials shows tremendous promise, such as recovering and repurposing solar-grade silicon from PV waste for value added application in other streams, such as in the production of lithium-ion batteries and potentially in EV applications. As solar manufacturing technologies evolve, we’re seeing solar power outputs at year 25 as high as 92%, showing a much longer useful life of solar modules, which will continue to produce significant amounts of energy beyond 25 years.”

One answer may not be recycling at all, according to Juger. “Certainly, defective modules or modules damaged in shipping will need to be recycled, but most modules can find another life in the secondary market. At year 25, most PV modules are warrantied to be performing at more than 80% efficiency. Some owners will be happy to maintain a system and receive power beyond the warrantied life; others will be happy to sell the modules to another place, such as a developing country with no access to any reliable electricity.”

Solaria is actively engaged with industry partners on recycling initiatives and solutions, Sharma says. The company works with several companies, e.g., architectural firms and furniture makers, to re-use reclaimed panels – converting them, for instance, into tables and doors.

“When Solaria manufactures products, there are sometimes rejects. At the present time, when we encounter a product that’s subpar, we recycle it, rather than discard it. This is a cost that manufacturers face,” Sharma says.

The onus in the immediate is on government to create this market. Government created the playing field on which fossil fuels dominated markets for a century, so this shouldn’t be a big ask as we enter a renewable energy-reliant future.  The consensus is we should be looking at Europe’s model — the PVCycle.

“In Europe, Solaria and other manufacturers pay a per-module fee for the environmentally responsible handling of panels’ end-of-life. PVCycle is a great program –and we need to replicate it in the U.S,” Sharma says.

Washington is one state working to implement a stewardship and takeback program, which would require every PV module supplier to submit a recycling plan by July 2022. It will probably get delayed, but it’s a start.