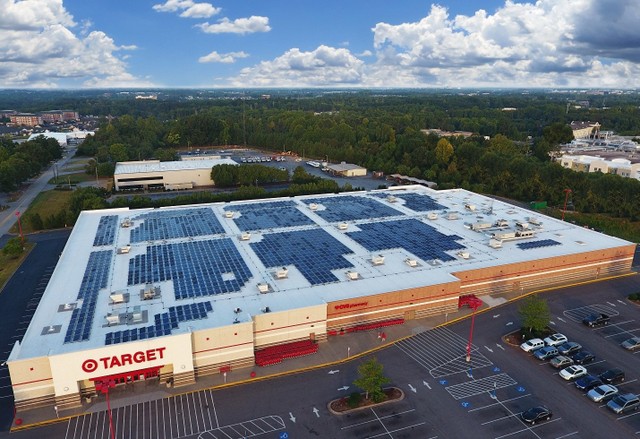 Target has grabbed the top spot among American businesses that are going solar. The Solar Energy Industries Association (SEIA) revealed Target’s ascension to the top of the list in its 2016 Solar Means Business report, which found that more American businesses are installing solar than ever before. Adding more solar this year than any other U.S. retailer, Target now has 147.5 MW of installed solar capacity. This is the first time Target has ranked No.1 in the report’s five-year history.

“We feel honored to be named the top corporate solar installer in the U.S. by the Solar Energy Industries Association,” says John Leisen, vice president of property management at Target. “At Target, sustainability is a principle that drives the decisions we make across the company – from the products we make to the way we run our business. We’re incredibly proud of the progress we’ve made in improving building efficiencies and reducing environmental impact. Our commitment to installing solar panels on 500 stores and distribution centers by 2020 is evidence of that progress.”

Covering corporate solar installs now in 38 states plus Washington D.C. and Puerto Rico, the 2016 Solar Means Business report tracks nearly 1,100 MW of solar installations at America’s top companies. To put that in context, that’s enough electricity to power the equivalent of 193,000 homes every year. Also noteworthy, in just the first three quarters of 2016, the report found 142 MW of corporate solar was added in the U.S., more than was installed in all of 2015 (129 MW).