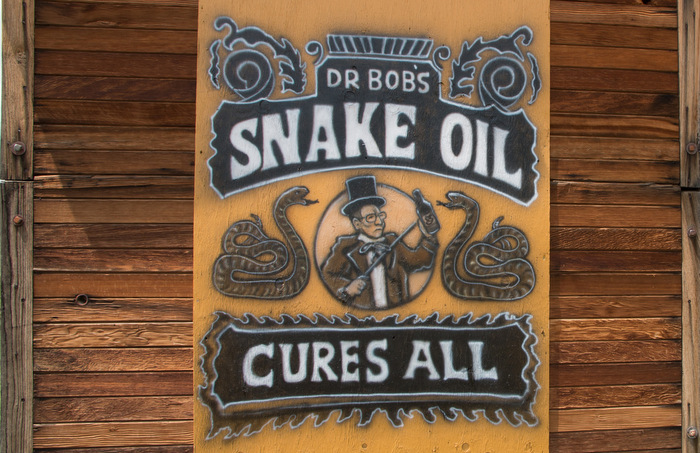 Every burgeoning industry is akin to the Wild West. The solar energy industry is no different, with its own version of western tropes — cowboys, drifters, lawmen, barons, settlers and townsfolk. However, perhaps the most destructive trope in the West and in solar is the snake oil salesman.

From conferences to boardrooms to trade shows, the solar snake oil salesman travels far and wide, touting unrivaled savings and jaw-dropping investments. If you’ve been in solar energy long enough, you are all too familiar with this character. It could come in the form of a company or a person, but an entity that has built its entire foundation on misleading proposals and impossible benefits. Their efforts, if we could even call them that, poison not only the concept of solar but all within the industry; thereby killing many potential clients in their wake. Those who are left harbor a bias so thick, they are barely able to see past their negative experiences.

This, of course, at a time, where the solar energy industry is battling a constant torrent of published misinformation and blatant inaccuracies. For example, Google “solar energy lies,” and you will receive an estimated 52 million results, with headlines that read: “6 Lies About Solar Power,” “Solar is a Scam and BIG LIE!!,” “Don’t Accept the Lies About Solar Energy,” and many, many more.

Veterans of the solar industry perceive these articles as hackneyed by now, but unfortunately, there are plenty of potential consumers seeking online reviews who can’t tell the difference — nor should they be required to do so. It is incumbent on those within the industry to educate, not fan the flame of falsities. How many of those online search results denouncing solar energy were caused by those snake oil salesmen?

So, it is understandable when solar professionals are all too often halted in their pitch by skeptical voices, citing this past issue or current article. This is the real issue! The consumer space is justifiably jaded, and there is only one way to combat this virus: honesty. It may read as a banal platitude, but the truth, like a reliable horse in the West, can take you very far. Here are three ways to ensure that horse is fed:

For a few dollars per watt more

If you’ve been in the solar industry long enough, you understand that every potential project does not pencil out. Whether it is due to location, size, demand or (potential) client expectations, proper analysis will convey a project that is not a viable asset for the consumer.

If this occurs, it is paramount that your company communicate the reality of the numbers (financial, usage, etc.) to the potential or existing client. Do not lie.

Firstly, and perhaps most obvious, the actual numbers will be exposed with time, undoubtedly resulting in a severed relationship with the client and a negative impact on your company’s reputation. A transparent approach could, and most likely would, have an opposite effect.

Don’t be ‘the man with no name’

The process of providing a potential or existing client with solar energy analyses can be timely, and oftentimes without much communication. We’ve all heard the story of the client that signed a contract and didn’t hear from the solar company for months.

It is imperative that the solar energy company remain in constant contact with the client, even if there are no concrete updates. This window into the process can give a client a greater understanding and appreciation of the time, work and effort placed on them and their project.

The too quick and the dead

The solar industry has begun to receive the same negative stereotype as the construction industry about its completion date promises. Since we understand that no project is the same, and every project has something go wrong, plan for this in advance. This way, when you deliver a potential completion date to the client, your company can achieve it.

Henry Cortes is CEO and Founder of Core Development Group.