The global solar photovoltaic (PV) inverters market will decline from $6.3 billion in 2017 to $3.7 billion in 2022, with Asia-Pacific (APAC) relinquishing its leading regional share to the Americas over the forecast period, according to GlobalData, a leading data and analytics company.

The company’s report: ‘Solar PV Inverters – Update 2018’ states that solar PV inverters will hold an aggregate global market value of $22.2 billion between 2018 and 2022, with an average annual value of $4.4 billion during the same period.

In terms of solar PV additions, APAC eclipsed all other markets for the fourth consecutive year, accounting for about two-thirds of global additions in 2017. Consequently, the APAC region led the solar inverters market, with a value of $3.75bn. It was followed by Americas and EMEA (Europe, Middle East, and Africa) registering $1.71 billion and $0.89 billion, respectively. 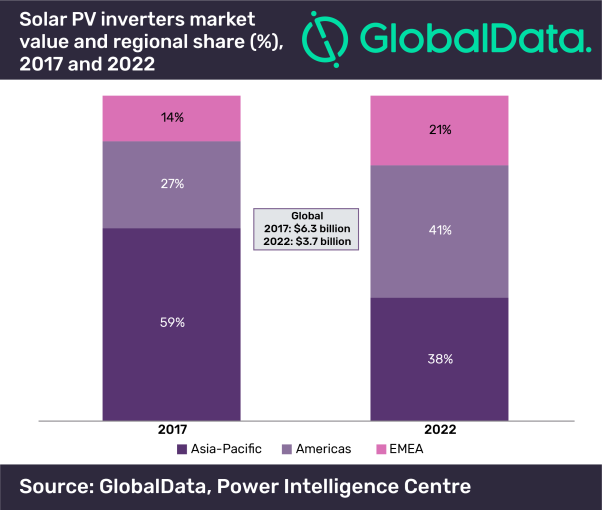 Subha Krishnan, Power Analyst at GlobalData, comments: “In terms of market value, China, the US, and Japan together held over 65% and led the global solar PV inverter market in the year 2017. The market developments in the top countries are largely due to economies of scale, emerging inverter technologies, and policy-based government and institutional industry.”

Between 2017 and 2022, the global solar PV inverters market is expected to witness a negative compound annual growth rate (CAGR) of 10.15%, in terms of market value. The estimated fall in the market value is mainly attributed to the fall in inverter prices.

Krishnan explains: “The solar inverter and module prices have declined for a variety of reasons, including but not limited to, persistent price pressure on equipment suppliers, the anti-dumping tariffs implemented by the US on Chinese modules, the euro and yen depreciation, and the downward adjustment of the minimum import prices. In the solar PV industry, buyers are price sensitive, creating persistent price pressure on equipment suppliers.”

The global solar PV inverters market has several strong participants such as Huawei Technologies Co Ltd, Sungrow Power Supply Co Ltd, and SMA Solar Technology AG. The highly fragmented nature of the market has also led to the reduction in solar inverter prices. As a result of the falling prices, the total installed capacity between 2018 and 2022 is estimated to be close to 370.6 gigawatts (GW), whereas it stood at approximately 316.2 GW between 2012 and 2017.