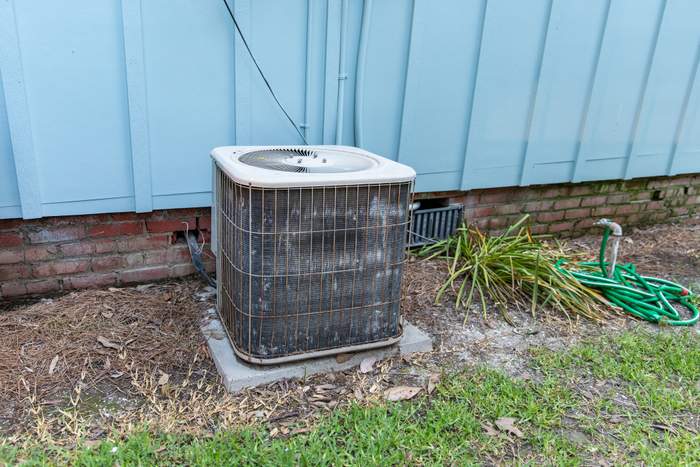 During the first presidential debate, Joe Biden threw out a promise to upgrade 4 million buildings and weatherize 2 million homes over 4 years, creating 1 million new jobs and re-energizing the economy. Smart home energy company Sense crunched some numbers on the potential impact of the plan, and their analysis revealed some wild numbers related to the impact of older HVAC systems and drafty homes.

For starters, 20% of Americans have HVAC systems that cost them an extra $882 annually on average to keep their homes cool—almost four times as much as the most efficient similar homes.* The 20% of homes with highest cooling use have a big impact on the nation’s energy picture, accounting for 45% of all cooling consumption nationwide. Updating these least efficient homes could save 8% of US residential electricity usage overall and have a significant impact on U.S. climate change goals by eliminating nearly 52M tons of CO2 emissions annually.

Updating and weatherizing the least efficient homes in the country could save consumers $15.3B annually while moving the country closer to climate change goals. Incentive programs that updated the 20% of homes with the highest cooling usage would eliminate 115 billion kWh of electricity usage annually. By comparison, in 2019 the U.S. generated 107 billion kWh from solar and 300 billion kWh from wind.

“The problem is we’ve been operating in a data vacuum with little knowledge about energy consumption inside the home,” said Sense CEO Mike Phillips. “That’s changing as innovations in machine learning can deliver digitized energy data that pinpoints the highest potential savings in the residential sector while enabling collaboration with homeowners to lower their energy costs as quickly and directly as possible.”

The study used anonymized data to analyze electricity use for air conditioners in nearly 15,000 homes across the U.S. and compared the 20% of homes with highest electricity usage for air conditioning to the most efficient similar homes. The efficient homes had similar square footage and geographic location but had the 20% lowest AC use, showing what’s possible with upgrades to the home’s HVAC equipment and home thermal performance.

The study also examined impacts on peak energy consumption. In California, the demands on the grid from millions of homes running air conditioning during peak evening hours (from 6 to 8 pm) prompted rolling blackouts this summer. Sense’s data shows that if the 20% least efficient houses in California were upgraded to match the most efficient homes, peak AC consumption would drop by 27.5%, reducing overall residential electricity usage at peak by 13.5%. Reducing peak loads so substantially would make the transition to low carbon energy a more realistic and achievable goal for policymakers and utilities, and reduce the current reliance on peak energy from carbon sources like natural gas – or expensive battery storage.

According to the EIA, heating and cooling account for more than half (51%) of a household’s annual energy consumption, so improving a home’s performance can have a big impact on consumer costs. Starting with an energy audit, residents can assess which of the following factors have the biggest impacts on their heating and cooling bill: the efficiency of the HVAC system itself, whether the home’s envelope is well insulated and tightly sealed, or the residents’ preferred thermostat settings. Updating an older, inefficient HVAC system or switching from oil or electric heat to a heat pump system can deliver significant efficiencies and pay off within a few years for many consumers.

Many states have committed to ambitious goals to decarbonize their energy systems, and energy efficiency is a key part of those goals. For instance, New York has adopted aggressive targets to decarbonize the power sector by 2040 and reach net-zero economy-wide by 2050. The Climate Leadership and Community Protection Act (CLCPA) set a 2025 statewide energy efficiency target that will deliver nearly one-third of its greenhouse gas emissions goal of a 40% reduction by 2030. The state has called upon its utilities to achieve significantly more, in both scale and innovation, in their energy efficiency activities.

While states have taken the lead to mitigate climate change, an aggressive national commitment to electrify all aspects of our economy would create up to 25 million good-paying American jobs over the next 15 years and 5 million sustained jobs by mid-century, according to Rewiring America. It could generate up to $2,000 annual savings for the average household on energy costs, dramatically lower CO2 emissions, and improve health outcomes by reducing air pollution.

Sense is working closely with its partners Schneider Electric and Landis+Gyr to digitize electricity in the home. By gathering intelligence about the key resources entering the home, such as electricity and water, smart homes can discover problems and optimize resources far more efficiently than in the past.

For consumers, the energy-smart home will make life more convenient and efficient. Consumers will be able to tell their home, “Charge my car by 7 am tomorrow,” and the smart home will figure out how to charge at the least cost and lowest carbon impact by tapping into data from the utility. Your home will also remind you about the best ways to use clean energy. For instance, it might prompt you to turn on your dishwasher or washing machine when solar power is produced abundantly on your roof or from the energy grid. Even better, the dishwasher will turn itself on when the energy cost is lowest, responding to information from the utility grid and your solar roof. When you go on vacation, your home will hibernate in low-energy mode until you return. Smart homes will share information that makes it easier for you to take care of your home, and your smart home will take better care of you, too.

How the data was analyzed

Sense’s data was gathered through an initiative in Sense Labs, an invention space where the company tries out new ideas that will make smart homes more insightful and less wasteful than they are today. Through a Labs project for AC energy comparison, Sense analyzed HVAC data from 14,948 representative homes across the country that have the Sense Home Energy Monitor to determine how efficiently the homes were cooled during summer 2020 relative to other users. The 20% of homes with highest AC usage were compared to the 20% of homes with lowest AC usage that were similar in size, zip code, and weather data. For the New York state data, the study analyzed 733 homes.