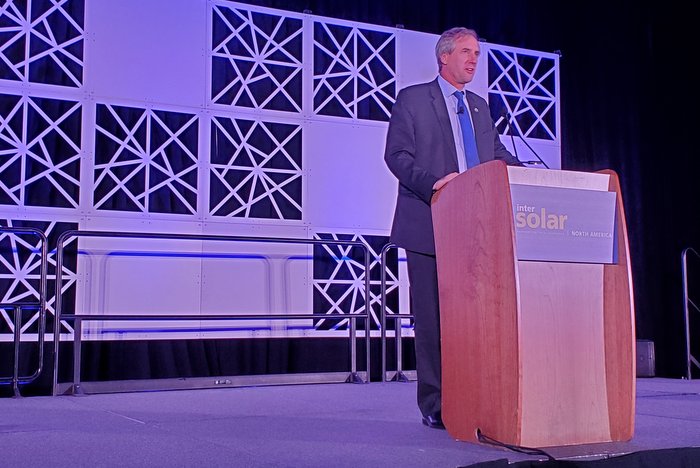 Intersolar North America was traditionally held in San Francisco every July but relocated to San Diego this February to somewhat rebrand itself as the first big solar trade show of the year. I can’t speak for how well this translated to attendance success (a last second Trump travel ban knocking out a host of Chinese companies didn’t help) and it was also 60 degrees the whole time (WTF, San Diego?) but David Hochschild, chair of the California Energy Commission, set a great tone for the Solar+ Decade in his keynote address.

Every random chat I had this week involves some version of this question: “What do you think of the show? Anything standing out?” And really it was Hochschild’s presentation that stands out. It was a reminder that states have the power to change the energy future of the country if they are motivated to do so (or, conversely, they can keep us stuck in the muck, awaiting the rising tides). This is especially true of California, the fifth largest economy in the world. Lucky for solar, California has used its considerable power for progress, essentially being the de facto energy policy and innovation incubator for the United States.

California is not without its own flaws in execution in the past few decades — human beings are still in charge after all — but it has tried to build something, and it’s worth re-examining its successes along the way. Here is the story as Hochschild tells it.

Sure, we know California is leading the solar industry by leaps and bounds. The million solar roofs. The new-build solar mandate. And so on. But Hochschild showed how all of these solar policy initiatives connect to a larger, long-term energy strategy – a strategy that began with the CEC’s creation in the ’70s and its early focus on energy efficiency standards.

Example: Refrigerator energy use was going up crazily until California mandated that refrigerators must meet a certain energy efficiency standard. This was fought by business as all regulations but especially because if California mandates that all refrigerators need to meet a standard, then effectively all fridges will meet this standard (no manufacturer is going to produce a California-only product). Thus, all states benefit, even the states totally uninterested in such things. Solar installers have seen this effect in action many times, most recently with California’s Rule 21 updates influencing inverter communication capabilities.

Since then, refrigerator energy use has plummeted, fridge prices have plummeted and the sizes of refrigerators have gone up. well, TV standards were next. This saves about $1 billion a year. Plug in chargers mandating shut off diode. That vampire load going away saves $300 million a year.

This all looks smart in hindsight but it helps to remember the mood of the room back when the state started to incentivize clean energy.

“We heard three fundamental myths,” Hochschild reminds us. “If you go big on clean energy it will crash your economy, employment will go up and the lights will go out. We heard that again and again and again.”

What happened instead? Since 2000, the economy increased by 46 percent (rest of U.S. 35 percent). Unemployment is down to 4 percent. And yes, there have been blackout issues several times in the state’s history, but they are tied to market manipulation, wild fires and old timey grid infrastructure. Clean energy has actually been a big part of the solution.

“This is a real lesson particularly in an era where the government gets demonized,” Hochschild said. “If you have healthy public process, you can develop really successful long term energy policies that save rate payers a lot of money.”

California’s energy use per capita is now half that of the rest of the U.S., and the state is nowhere near done on its way to a 100 percent clean energy standard. Next up is the electrification of buildings and transportation.
Some standout factoids here:

Hochschild was asked how he would respond to someone from Texas questioning the California strategy of regulating their way to their energy future — especially touting savings for ratepayers as a virtue as he did — considering de-regulated Texas is sporting much, much lower electricity rates. He answered by pointing back to the aforementioned success in energy efficiency standards for lowering usage, which is also nicely factored out of that Texas rate equation thanks to California regulations enacted long ago.

My thought: Are electricity rates even the best metric to judge successful energy policy, especially as dire climate change threats loom? Seeking the lowest possible rates in the short-term feels like the same base-level decision making that put us in this predicament to begin with, especially considering the 100-year head start fossil fuels have when making this argument. Pushing for short-term economic gains without considering the broader, longer-term impact in 2020 is willfully playing checkers instead of chess.

Hochschild’s tale of state leadership driving a visionary, forward-thinking renewable energy policy via a combo of regulations and incentives is inspiring but also kind of infuriating considering how much more ahead the United States would be in terms of innovation, jobs and renewable energy adoption if more states and/or the federal government took on the same leadership tasks necessary to foster the growth of a critical new industry.