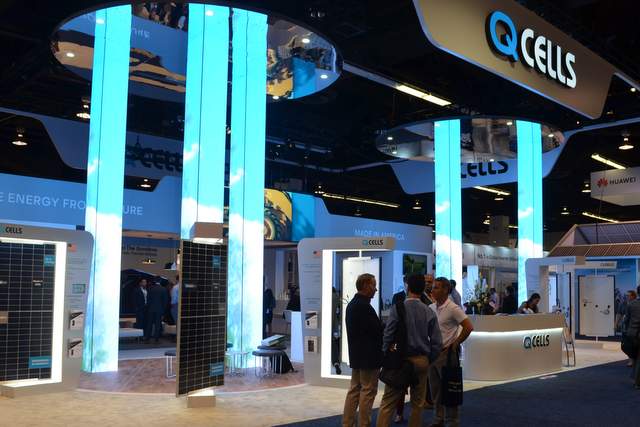 Photo of a cool booth setup.

Your Solar Builder editor entered the whirlwind of news, numbers and handshaking that is Solar Power International and emerged with a notepad filled with gibberish. What language is this? What secrets does it hold? We sent it to a forensics lab, the archaeological department at Oxford and the guy with wild hair on Ancient Aliens for their interpretations. After this thorough analysis, we believe these are the top solar story lines in a post-SPI world …

You get the sense that the solar industry has finally punted on trying to waste much more time inching the message boulder up the current administration’s hill and is now putting those resources into local efforts. This is likely the better route to go anyway, and the initiatives announced at SPI could do the trick if developed.

Just before SPI kicked off, the Solar Energy Industries Association (SEIA) and The Solar Foundation unveiled the Solar Automated Permit Processing (SolarAPP) initiative, which is the latest collective effort of the industry to streamline permitting. Reforms include: A safety and skills training and certification program that allows residential and small commercial solar and battery storage installers to attest that their projects are compliant with applicable codes, to eliminate traditional multi-step permitting processes; a standardized online platform provided to local governments at no cost, a list of established equipment standards and/or certified equipment for solar and storage projects installed through the proposed process and more.

There have been several attempts at this over the years, all of which fell short, but this one might have a shot because of the timing. The economic case for solar has never been better, and the technology and techniques are proven with copious examples to highlight.

Also, what local government would turn down the promise of a ton more jobs? To grow that base of skilled solar workers around the country, the Solar Training Network introduced AmericanSolarWorkforce.org, an online platform to help solar companies recruit qualified candidates; allow solar job seekers to find career and training opportunities; and help the entire industry build a strong and diverse solar workforce. Using this platform, which is free of charge, employers can post opportunities on a solar job board and connect with thousands of candidates looking for solar career opportunities. Employers can also create company profiles, review candidate applications, and communicate with potential hires.

2. Solar pros see the short-comings of the industry and are actively trying to address them.

Two key examples here. First is in grid services. Features for grid services are mentioned all of the time now, from inverter and optimizer products to the need for storage and other ancillary services. I take it as a sign that the relationship between utilities and solar companies is now evolving past an adversarial stage because there’s nothing left to prove about solar as viable generating asset. Now, solar has to prove how it will best integrate and play nice on a wide scale over the long-term. This was always the case, but it feels everyone is getting on the same page about pursuing solutions.

For example, of all the things bouncing around the mind of CJ Colavito, VP of Engineering at Standard Solar, these days, he most wants to find a way to sync third-party radar forecasts with smart inverters for advanced ramp rate control — to ramp down voltage slowly prior to cloud cover that will cause voltage flicker. 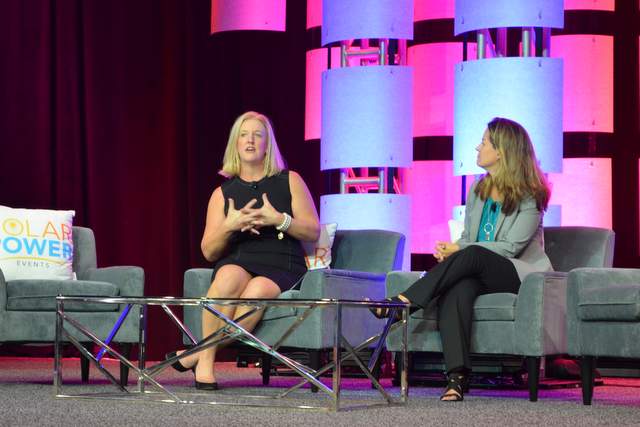 The second short-coming is a short-coming for most industries: diversity. Judging by comments during the opening session and the upcoming Solar Jobs Census, solar thought leaders realize the industry is in position to not just remake the grid, but the makeup of the American workforce – not just to be PC and nice but because there is value inherent in a diversified workforce with growth opportunities. Also, check out this initiative from SEIA to work with Historically Black Colleges.

One area in the U.S. solar industry still in need of attention is the full sustainability of a solar project. For example, panel recycling is a fairly big can that keeps getting kicked down the road. A DNV GL report released at SPI listed stranded assets as a key question in its market mechanics. At some point we will run out of road and kick that can straight into a million tons of PV that needs to be put somewhere. This isn’t a crisis (at least not yet) because there are solutions, at least according to First Solar, which has developed a standard for doing so and been put its system in place. Solar is recycled fairly easily — and for a profit — in Europe and that model could be replicated here.

The next can soon to be kicked is in storage. Storage is basically the key to solar taking over the world, but storage is dirtier than solar on the clean energy scale. Cobalt is a safety hazard. Lithium needs to be mined and poses its own potential for fire. Lead-acid battery companies claim to have the most recyclable solution, but does it perform as well as the future needs? And also, it is comprised of lead and acid. This is stuff that needs to be fully considered within the grand plans.

4. So many storage solutions… 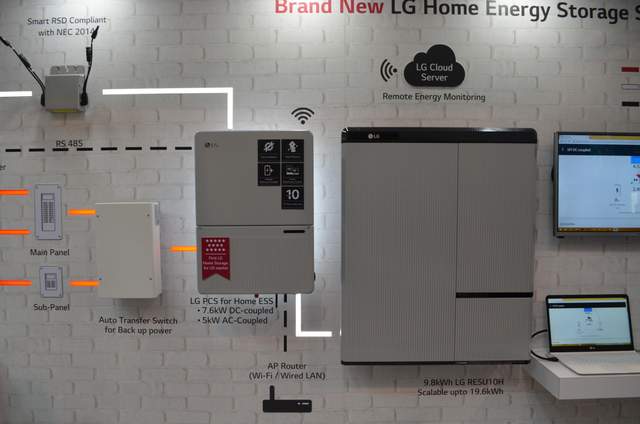 Speaking of storage, every turn on the trade show floor seemed to present a new energy storage system or bundle of products to solve all sorts of solar + storage equations, from simpler backup capabilities to time of use to peak shaving and on and on. Panasonic has a full solution pairing Pika’s islanding inverter with its batteries and modules. LG debuted its complete solar + storage system for the home. SimpliPhi has varied its case sizes and voltage range. Sonnen has gone full tilt into energy management + home automation – a long fantasized idea that is now real-life – that is more load shaping than load shifting.

It’s all very cool. The issue from installers we chatted with at the show is there’s no one software that can deftly handle all of the storage mathematics they need (those that are great for peak shaving can’t be used for resiliency, etc.). There’s more to figure out here, just like on the battery side, but each SPI feels closer and closer to the goal line.

The reigning champion for the “biggest solar opportunity with the biggest issues to solve,” the commercial and industrial rooftop, saw several big-time debuts to ease some of these headaches.

A ton of solar deals are off the table because of the commercial rooftop life cycle and price tag. The deals that do go through on a different timeline than the roof itself are going to be a huge headaches come roof replacement time. Headaches meaning stuff will for sure be broken when the solar system is removed, stored and put back on. Standard Solar and Carlisle Roofing teaming up to solve this at the outset with a bundled package — a new C&I silicone coating spray applied to the existing roof membrane (with optional insulating foam) that installed with the PV system. The deal is financed through a PPA agreement with Standard Solar, so the building owner is essentially paying for the new roof (good for 50+ years) during the 25-year PPA. 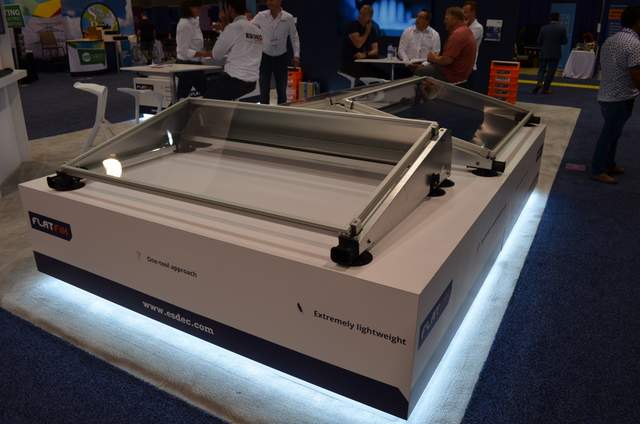 On the system side, available in the first time in the U.S., Holland-based ESDEC debuted its slick Flat-Fix commercial rooftop mounting system. The same lightweight design can be laid out in south-facing or east-west configurations and is built with one tool, keeping the SKUs at a minimum. The feet are adhered with glue (or a bolt if needed) and an optional ballast tray. The system is already proven but the team needed to make a few tweaks to launch in the U.S., mostly relating to cable management, all of which were cleverly designed like the rest of the system.

Remote C&I system design has never been easier thanks to Nearmap’s updates. Its digital surface and line of sight analysis produces a jaw-droppingly clear picture for 71 percent of the U.S. population that is updated 3 times per year. You can really tell the difference between obstruction or dirt, as well as accurately measure the pitch and dimensions of any surface. When combined with the newest version Aurora Solar’s software, Aurora estimates 10x performance upgrades for multi-megawatt, commercial-scale solar projects added with the ability to simulate the solar energy production of a PV system while designing, allowing real-time assessment of design choices and elimination of change orders. An enhanced “fill zone” functionality is also available to automatically optimize solar panel locations to maximize the number that fit within an available space.

6. The next big trend will emerge from the California solar mandate (and maybe it’s an old one?).

Consider a company like CertainTeed – been around for a long time, and didn’t have a lot new at its booth to discuss. Its solar products are focused mostly on roof-integrated options that are not as popular as traditional mounting + solar panels on an existing roof sold and installed by solar installers. But when all new homes in California are going to need to come with solar already on the roof, will builders and roofers favor something like this they can handle themselves? Or, consider SunFlare, a company with a flexible CIGs technology. In 2018 it seems like a niche product – can be installed on top of existing carports and other nontraditional areas, but it’s close to working with a high-end national homebuilder that liked its solar shingle because “it’s a roofing product, not a solar product,” thus allowing them to install new solar on a new house without contracting out. The president of ESDEC also mentioned that in Holland their mounting system is seen as so simple to install that HVAC companies are a big customer segment for them because they could easily add it to their service offering.

Will the mainstreaming of solar earlier in the building process end up cutting out companies and products that rule the day today? Maybe a wild thought, just remember to keep your hands and arms inside the solarcoaster at all times.