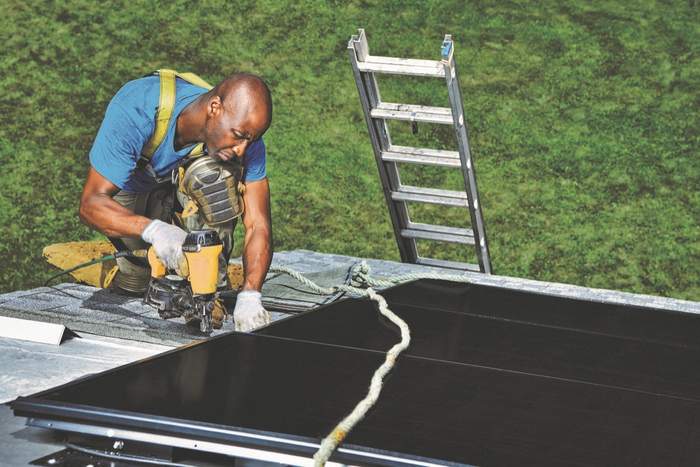 The integrated solar roof has long been a solar technology goal — combining solar power with a watertight roof covering — but the category (often seen as just “solar shingles”) is perceived as too expensive or too experimental compared to the cost of separately installing solar and a traditional roof using time-tested concepts.

But then again, that traditional route has its own timeline concerns as many solar installations have been done on homes with traditional 30-year roofs that were expected to fail before the end of the solar system lifetime of 25 years. Thus, when these roofs do need to be replaced, the solar system must be taken off and reinstalled, adding substantial cost to the system.

Worse, many solar systems have been installed with a large number of roof deck penetrations, which can lead to roof failure prematurely. In contrast, a building-integrated photovoltaic (BIPV) technology can eliminate most if not all such penetrations.

This is where newer solutions in the roof-integrated solar market (residential BIPV, lets call it) make a compelling argument by matching up those traditional solar PV installation concepts and standard re-roofing practices to create something new yet familiar and proven.

The system to watch

The U.S. residential reroofing market is 5 million roofs per year, according to Martin DeBono, CEO of GAF Energy. “GAF alone did four times as many reroofing installs as the entire solar industry did installs last year,” he notes.

This is why GAF Energy’s residential BIPV product is most interesting — it eschews a new solar PV technology that mimics the look of a shingle in favor of racking system that roofers (or solar installers) can install during a re-roofing that mimics the process they are used to. It makes solar no different than flashing in a skylight. Its deal with Solaria also means GAF systems come with the slickest all-black high-power PV modules on the market to keep it aesthetically pleasing and super productive.

A significant advance to this residential BIPV approach is the speed with which the job can be done. Since most traditional roofing companies — and local permitting authorities — are not very familiar with solar, the design-to-permit phase was slow.

But with the advent of vertical integration by a company like GAF — the world’s largest roofing company — streamlines this process.

GAF’s update — the modular “Flex” system — streamlines things further. It is based on a 4 panel by 3 panel array module, which can expand to 12, 18 or 24 panels. While one module size will not fit all situations, it reduces the cost of design, packaging and labor. Indeed, the modular kits are approaching a plug-and-play level of installation ease.

Tesla remains bullish on the short-term potential for the solar shingle market. In early May, CEO Elon Musk said that he wants to put solar roofs on 1,000 houses per week, during an earnings call. While Tesla has enough installed capacity to meet that goal, the Covid crisis put a final lag bolt in the coffin of the company’s Buffalo factory, which closed in late March.

Cost is clearly a factor in the adoption rate of actual solar shingles. Thus far, that cost has dropped, thanks largely to lower solar cell costs, but still seems to exceed the cost of independent roof shingle and solar systems combined:

“The average roofing installation price for a solar shingle roof costs anywhere between $60,000 to $75,000 depending on the slope, pitch, and size of your roof. You can expect to pay $21 to $25 per sq. foot or $2,100 to $2,500 per square installed on a standard sized single story home,” calculates modernize.com.

Smaller startups continue to innovate, evolve and drop in price as well. One way that solar shingles may become more economically compelling is through the use of more advanced thin-film solutions instead of the use of crystalline silicon cells.

Sunflare, for example, is bringing out a CIGS four-cell solar shingle, expected to be available by next year. Similarly, Hanergy is offering CIGS thin-film solar tiles in either a curved design — the HanTile — or a flat SOLARtile.

Another new thin-film offering is the Ergosun solar shingle, which looks much like a slate roof tile, but can gather both direct and low-light sun rays. The waterproof concrete base is lapped to be waterproof and generates 15 Watts per tile, a 60% gain in yield compared to a standard silicon wafer solar panel with the same square footprint, the company suggests.

The clearer path to success right now might be thin-film solar rolls that are adhered to metal roofing sections. Metal roofs are becoming increasingly popular in Western states where wildfires are a growing threat. Here is a case study we ran on one net-zero home that did just that.

Sunflare also has a new module — PowerFit 20 — that is glued between the raised seams of a standing-seam metal roof. The 60-W CIGS panels come with a butyl adhesive backing that peels and sticks to the metal. Other metal solar roof manufacturers will mount the thin-film to the metal in their factory and ship to the site.

One failed thin-film solution was from Dow, which sold its technology to Real Goods Solar in 2017. Unfortunately RGS filed for bankruptcy early this year. The company had attempted to shift the thin-film design to crystalline cells along the way. Another seemingly promising technology from Forward Labs launched in the Bay Area several years ago but failed to meet its demand.

Those cautionary tales in the solar shingle market remind us to consider the often overlooked role of the warranty. How may of today’s roughly one dozen residential BIPV manufacturers will be around in 25 years to make good on a warranty claim or to fix any roof issues 20 years down the road after a bad storm?

DeBono suggests that roof-integrated solar market is one in which only well-capitalized companies — like his own — should compete. While CertainTeed (which has a residential BIPV concepty similar to GAF), Hanergy and Tesla are also large enough and have enough revenue diversity to suggest they have sufficient financial wherewithal to self insure for warranties, others like RGS, unfortunately did not.

Charles W. Thurston is a contributor for Solar Builder magazine.